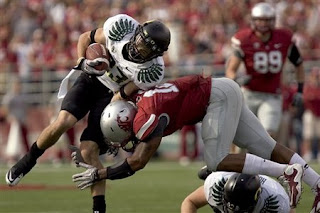 That would be Washington State University Defense above.  (I can't say the name of the other team because it's something of an expletive around here {BCS polls be darned}).  And to think, I knew nothing about football two years ago.  Come to think of it, I still don't.  But college football is coming to a close for this year, and I have seen Shoes pace and cuss and high five his father and have watched his phone blow up so that his core group of friends {spread across a nation} can still experience the game together.  {Who am I kidding?  I love being a part of it.}

Actually, this post isn't anything about Cougar Football.  But Apple Cup (the iconic yearly Washington battle between the Huskies and the Cougars) is quickly approaching and so it's on my mind.  We're still not entirely sure where we'll be for Thanksgiving, but my plane ticket to Spokane has already been purchased so that the holiday that is Apple Cup is properly observed.  (Apple Cup is the weekend after Thanksgiving.  It is the 3rd Holiday of the Holidays.)  Don't ask me how I'm going to fit a trip in to Pullman with the close of this insanely busy term.  I'm not quite sure.

The "Defense" I'm talking about is my own defense.  This term has been filled with learning about attending, tuning in, the clinician response, empathic responses.  I have never, not even when in "divorce recovery", had to think so much about my own feelings and processes.  It's ex.haust.ing.  And I have to tell you, I think I'm a little neurotic.

And defensive.  (A ha!)  I've learned I do not like to be questioned.

In the past 3 months, I have started to realize that I feel like I have to offer an explanation for every decision I make.  Sometimes, like when I'm in field supervision and my supervisor needs to talk about my sessions with clients, that's entirely appropriate.  Sometimes, like with my friends, nobody cares.  This came to a head with my doctor last week, who had asked me to remind him why I had chosen one medical decision over another.  In true Lisa fashion, I took it too far and yammered on and on about WHY I made the decision that I did, and when his eyes started to glaze over and he started to tilt his head, I realized I was trying to JUSTIFY my decision.  I stopped, grinned and said, "You don't really care though, do you?" And my Portland doctor who's really from Eastern Oregon said, "Nope."

How liberating.  And almost embarrassing, all at the same time.  So.  If you've ever had to sit on the other side of my blah blah blah while I tried to explain something all the while trying to hide insecurity and hoped you would see me as a competent individual, apologies.

Let me know.  I'll buy you a glass of wine and we'll chat about something much more pleasant.

Or, we'll get a beer and a plate of french fries and we can talk about the Pac10 prospects for next year.   I think I'm almost ready to competently have that conversation.

this is not just about procrastinating my homework.

what is it about fall - this fall - that is so deeply, wholly and fully satisfying?

I drove to work today {I usually take the bus to the Very Large Hospital} and when it was time to leave, it was dark {of course} -- sidewalks lit by dim streetlight.  And foggy.  Lightly raining.  The most perfect deciduous tree leaves falling at regularly timed intervals.

For the first time in  a long, long time, I dawdled on my way to the car.  Stopped on the sky bridge to overlook the campus and breathed the cold air in deeply.  Experienced a tidal wave of contentment.  Of peace.

For the first time in years, I feel completely and totally at rest.  There is no other way to put it.  I'm sitting in my  very, very small studio apartment and am getting ready to start {more} {never-ending} homework.  I'm completely graduate student poor.  Busy out of my mind, most days.

On Sunday I went to a children's musical with my sister, Lizz.  We didn't truly know that it was a children's musical, put on by children, for children.  But it didn't really matter.  As I was sitting there, quietly, watching this rather well performed, decently funded production, I fought tears several times.   Because, I'm a dork.  And also, because I was sitting in an utterly charming, historic theater, watching the mystical play of children on a perfect, absolutely perfect, fall day.

So completely at peace.

I've done a perfectly inadequate job explaining any of this.  But this contentment, this quiet peace, this resting at your core ... If I could give this away, I would.

It feels terribly selfish to keep it to myself.
Read More 3 comments | Posted by Lisa | Links to this post

fall is good to us. 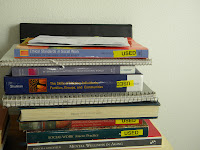 just to be clear, this ethics test was not so good.
in the way that it was so tryingly detailed.
you'll be happy to know the school thinks i'm an ethical worker.
i think.
technically, we haven't received it back.
but i knew all the answers.
because i am a compulsive student.
seriously compulsive.
as in, i lost my first points ever, marring my 100% average, near the end of winter term.
last year.
i was disappointed.
i may have issues. 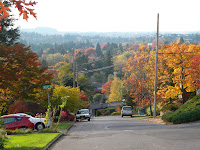 but i am never disappointed with the view from my house.
especially right now.
so looking forward to seeing it dusted with snow.
we'll worry about inexperienced city snow drivers later. 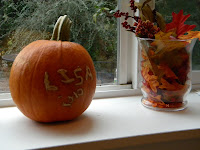 and i am delighted in this pumpkiny gift from this lady's father.
extended family by adoption.
it is probably time to take it down.
but i'm not ready.
so in a few weeks, it will still be halloween.
but will also be thanksgiving.
on its way to christmas.
shortly before new years.
i plan on drawing all of this out. 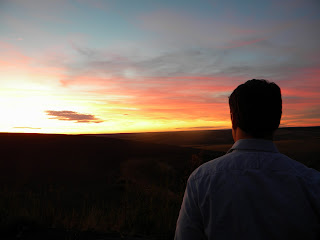 this boy.
in December, it will be 2 years since our first date.
he is the best part of fall.
college football obsession included.
we have now been doing "long distance"
longer than when we had lived in the same town.
he is still shockingly good at long distance.
visiting, calling, all of it.
we do not get the luxury of having a normal relationship.
time is sacred.
phone calls are sacred.
{we watched the election coverage together ... on the phone}
so looking forward to our second set of holidays together.
so grateful that we are automatically included in each other's plans.
when you get one like this, you hold on.
Happy Fall.
Read More 3 comments | Posted by Lisa | Links to this post