About your body quitting.

As in, mine quit.  My body quit.
Well, kind of.
I mean, my heart's still beating and I'm still breathing air.
Finishing school/job/internship to graduating to moving to getting ready for the wedding to frantic getting ready for Puppy are not restful activities.  They are not restful activities and they have continued well into my "summer vacation."

Which is confusing, because I initially thought I was resting.  I mean, I wasn't staying up until 1 and getting up at 6.  I wasn't rushing around the city at all hours of the day and night.  I wasn't fretting over human development theory and my counseling orientation or wrestling over appropriate diagnosis for my mental health assessments.

However, yesterday morning, I very innocently rolled over in bed, just like I have a million, zillion times before.

Only this time, something Very Bad happened.  My entire upper back twinged in the sharpest pain I can imagine, a pain so bad it felt like someone had kicked me as hard as he could in my stomach.  It took my breath away and the pain was so severe I ended up throwing up.  (Guess you didn't really need to know that last part).

And then I froze.

Oh, how I wish I was kidding.  I managed to scoot my phone over to my feet to text Shoes to come home at lunch.  He had to help me put clothes on because I couldn't reach my arms over my head.
Shoes, despite all of his giftings, is very, very  bad at changing other people's clothes.  He better get some practice before we have a miniature human.

I spent 2 entire days in bed, moving very slowly and awkwardly because no matter what I did, it hurt.  It spasmed.  Nothing helped.   Luckily, since we're living with Shoes' mother in the Monster House, I've had her help, and oh my.  I didn't realize how much having help ... helps.  She's been helping me move around, helping me eat.   I don't know what I would have done without her, especially since Shoes left town on short notice for a day long meeting in Seattle.  What would this have been like if I was living on my own in the studio apartment in P Town?

It's getting a little better.  I can now sit up to type and I actually took a shower this evening.  It has to, has to, has to, has to get better by Monday though.  I have a frozen yogurt date with an old, old friend who lives nearby in Idaho and we have major giggling to accomplish.  Mom in law and I have to pick up Puppy on Tuesday.  !!.  Puppy has her first doctor's appointment Wednesday afternoon at the vet school.

And I have my first Master's level job interview for a child and family therapist in a separate town nearby Wednesday afternoon.

So body, I'll give you what you're demanding right now.  I'll try to take it easy.  I'll take lots of extra naps.  I'll spend extra time in the hot tub.  But.  You gotta' cooperate with me.  I'm getting married in 22 days.  This stuff's just not slowing down.  But I'll try to respect you a little more.

Now, in a random, nonsensical way to end this post, here's the latest picture of Puppy from the breeder, because it makes me happy: 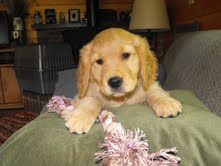 She seriously makes me happy.
Read More 3 comments | Posted by Lisa | Links to this post

I usually just say no.  I mean, it's a good natured, good humored, realize my own limitations, would rather pay for things I like on Etsy, am in awe of those who can, just say no.

Obviously, then, the most natural thing for me to do when planning my wedding to Shoes was to  implement several DIY projects.  Well.  Maybe not several.  Maybe more like a few.  Maybe like no more than three.

Oh, but that's more than enough for me.

Just like 50 gazillion brides out there right now, we're having a farm vintage wedding.  Right, I know.  It's been done.  But.  Anybody who knows me knows my love for history and antiques.  And with our wedding set in the middle of the rolling wheat fields of the Palouse, there was no better setting/theme for me.

Because I don't craft, I also can't explain what I'm doing.

But I'm going to try.

Humor me.  I don't have any 8 year olds with PTSD or any depressive/suicidal 15 year olds to provide therapy to.  I have to spend my time somewhow.  (Besides this I also watch a lot of MSNBC and read The Nation.  I look for a job every day.   I get ready for Puppy.)

Lots of Burlap, lots of lace, lots of Mason Jars at the wedding.   And then I found this antique suitcase I wanted to use for people to put cards in.  So, logically, I had to make a banner that reads, "CARDS."  Right?  Because how else would people know to put their cards there?

Problem:  I had no idea where to begin.  So I went to the local scrapbook store, where the uber patient saleslady spent almost 45 minutes with me.

Here's a little hint of how it turned out (for absolutely no good reason, I don't feel like giving all of my cards away just yet!): 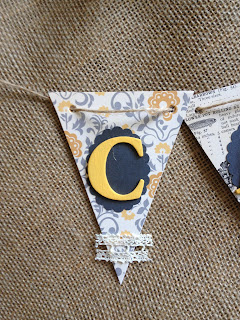 And here's the breakdown:

1.  Chipboard pennants.  I didn't even know they made these things pre-cut.  (I know nothing about crafting.) 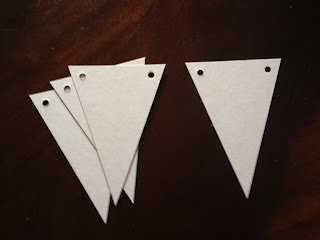 2.  Paper.  I traced the chipboard out on the back of the paper and glued it on with a gluestick and alternated between these 2 patterns: 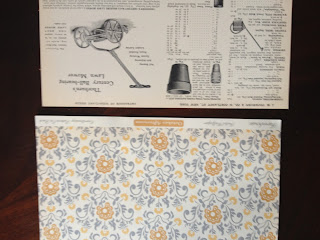 3.  Cutouts for the letters to be glued on to.  I spent $18 on the cutout thingie.  Looking back, I wish I would have just used the scrapbook store's.  Because I don't craft, Good Lord knows when I'll use it again! 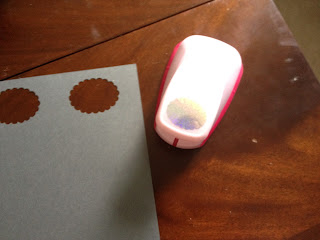 4.  Cardboard Letters.  Also pre-cut and pre-packaged.  (Seriously.  Who knew?).  I painted them a lovely Marigold color with acrylic paint, which I actually had to go to Michael's for.  (This was an all morning kind of project.  Good thing I have that kind of time now ...) 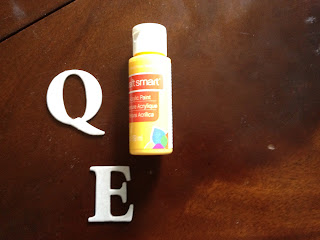 5. And then I glued them one on top of the other.  Bam, bam, bam.  And added a little bit of lace at the bottom: 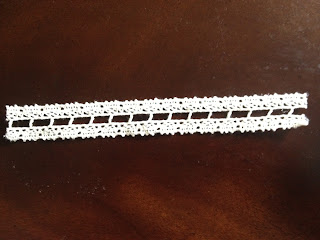 6.  A little bit of jute running through the top adds a little extra farm feel.  And again, the finished project:

Don't tell anybody, but I actually had fun doing this banner.  And, of course, felt like a genius afterwards.  That said, however, I'm only going to do two more posts like these, I think.  One on the terror that is painting canning jars to look like the vintage blue real deal (because at $15 a pop for the real vintage jars, I decided to spend our wedding budget on other things.  Like a prime rib station.).  The other will be the journey that is re-furbishing used windows to paint the wedding program on (already off to a rocky, glass shattering start).

Now, Shoes and I are off to hit golf balls at the driving range.  I plan on talking to him about writing our own vows.

About taking a little blogging break ..

... it was actually pretty fantastic.   I took a blogging break because I think I took a break from real life.

That was pretty fantastic too.  I graduated.  I went on a road trip (as previously discussed).  I moved all of my worldly belongings to Pullman.  And that's where I get stuck.

I'm not in school.  No clinicals.  No job at OHSU.  I work on a lot of stuff for the wedding (which I'm so excited to show you.  I had no idea I could make these kind of projects ....) and, here's our very big news.

Yes.  We're staying with my mother in law (but in all fairness, it's a monster house).
Yes.  We're getting married in about a month.
Yes.  We have about 15 family members staying with us for the wedding.
Yes.  I'm looking for a job.
Sure.  We have our hands full.
But.  We have been wishing and hoping and planning for puppy for 3 long years.

This is puppy at 5 weeks old.
She's a Golden Retriever (Red) with good breeding and a sweet disposition.
I'm picking her up on July 31st in Spokane (her breeder is driving her from Okanogan).
She's a dollface.
I'm seriously in  love.
I keep her picture up on the laptop.
I've puppy proofed the house.
Researched puppy training (obsessive research).
Bought her a million toys she may never play with.

The breeder calls her "purple collar."  The breeder's granddaughter calls her "Clara."  The vet just re-named her "Big Bertha" because she is one seriously chunky ball of LOVE.  We don't have a name for puppy yet.

I'm so ready to have her here.
With us. 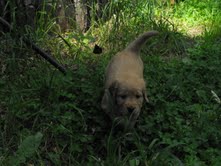 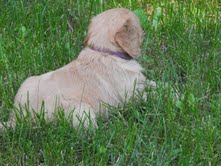 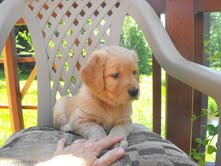 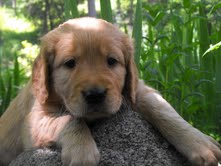 ﻿
Read More 5 comments | Posted by Lisa | Links to this post