Sister Cheryl and I just spent 3 days in Portland trying to find an apartment for this fall.

Goodness. What a project.

Maybe there's a good time to find a place in the city. Maybe there's not. Maybe I have no idea what I'm talking about. But the neighborhoods we loved did not have openings. Not yet. And many, many, many of the places we looked at were run down. Or unclean. Or gave us a creepy feeling (important filter, that creepy feeling).

O, the options on graduate school budgets are limited. And the car sickness feeling that invades me after driving in circles for 3 full days is too, too much. So we did not get our cute, independent hardwood place in Ladd's Addition. We did not even get an appointment to see the one halfway affordable place in the Lloyd District. We called so many places I mixed them all up within a half hour. We scrutinized and discussed and compromised ...

And after deciding that we absolutely could not keep this process up for many more trips (we do live over 4 hours away), we put some money down on a little apartment right on the East side of the river.

10 minutes away from the neighborhood we most wanted to be in.

And a great, big relieved feeling that that part's over.

... gotta have something to eat this year, after all ...
Read More 8 comments | Posted by Lisa | Links to this post

i didn't think it was possible ...

but I almost did.

The very first week of the 3rd grade, I, in my cherubian little girl state, sat at my desk, #2 pencil in hand, listening to Mrs. Wilson instruct us to write our names in cursive on our wide lined paper. We had, after all, all learned how to write in cursive during the 2nd grade ... but this was a test, of sorts, to see how much we had retained.

And so I wrote the letters, in cursive, out, shielding my paper with my hand from Robbie, who not only tried to copy everything I did, but who was also a jerk who always tried to kiss me on the playground or burp on me.

But it didn't look right. Not at all. And I couldn't exactly figure it out what the problem was, which, yes, even in the 3rd grade, frustrated me. The letters were all there. All in cursive. But not right. Not correct.

And then I realized that I had written the letters out one by one. Technically, they were correct, but they were not connected. My cursive letters were in print form. And when I realized that, it was so easy to erase them and do what I had already learned to do. This was easy. No problem.

On June 18th, 2007, I came home to this Vineyard Town from a relaxing outing in the Mountain Town. Eventually I went to the study to open up the computer to balance the checkbook as Husband At The Time had just left for Alaska to go Salmon Fishing.

But when I opened up the computer, I did not just find the link to our online banking site. I found many, many emails that forever changed the course of that marriage and that life.

Anniversaries, of any sort, are so easy for me to remember. But I almost forgot that tomorrow was the 18th.

These past two years have been just terrible and simply amazing. I've reclaimed so much of what I used to know: that I deserve better, that there's always been a plan, that I'm going to be ok and that I can let go. Relax.

Now I can give myself permission to do them.
Read More 4 comments | Posted by Lisa | Links to this post

I'm going to have to re focus a little bit on this blog. How on earth did I have so much steam to keep going in 2006 on the MSN blog and WHY am I so LAZY now?

This is where we are with grad school:

I am not nearly, not a little, not even remotely done being absolutely ELATED with this recent fantastic news in my life. And you'd think I'd have a little more humility when the people I respect most affirm my acceptance with, "Wow. The on campus program? That's a highly respected school." But. I cannot not grin with glee. It's my over-achieving nature.

I just accepted my financial aid award letter .... OUCH! Out of state, graduate tuition is the PITS!! I received enough to cover tuition and fees only ... and will be working quite a few hours during the week (I have no idea where yet) to cover living expenses. But. It's so worth it. Next year I'll ask the University to pretty please re examine my residency status and there will be so many more scholarship opportunities as a returning graduate student. I'm also going to hope against hope for a graduate assistantship at some point ...

Next weekend, I'll be going to Portland with my sister Cheryl (who ALSO got accepted - into an undergraduate program - yay her!) to do fantastic and frustrating things like look for apartments (or potential neighborhoods in the city) and learn how to ride the MAX. We have already decided that living downtown is definitely not going to be an option ... although there is such an allure to it ...

That's right. I'm 31 in 2 weeks and have no clue how to ride the MAX ... or even a bus line for that matter ... I guess that's what I get for living in rural Eastern Oregon and Washington for the past 13 years.

MSW new student orientation is the first week of July.

The County has {somewhat forcefully} asked for a letter of resignation ... but not because they're displeased with my work. Rather, they'd like to know what time frame they're looking at to re hire my position. So, County, we will part ways on August 21st.

And I hope to be out of here by the first of September.

I absolutely cannot describe what a relief this move is or how ready I am. This Vineyard Town's luster faded almost immediately in 2007 when I knew that I had to leave everything this place has come to represent. I received Former Husband's last financial payment a week ago, and it's just one more piece of the Great Release.

I've quit my 2nd job waiting tables and am spending these last 10 weeks or so here with the people I adore. Last night my roommate and I watched a few episodes of The Bachelorette (I know, I know ...) and as I was holding Miss Madelyn Happy Pants, I realized how TERRIBLY I am going to miss her. 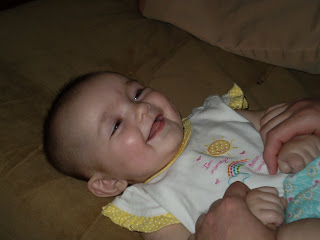 Such a doll. But we do catch her doing some pretty weird things, too. 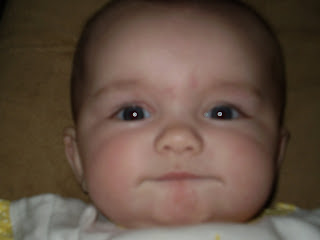 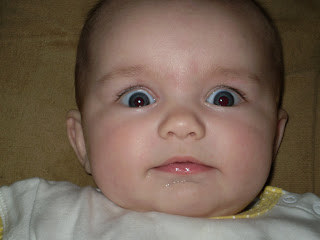 I'm pretty sure we were not trying to startle here right here. Sometimes ... she just does things like this.

There will be LOTS of Madelyn time this summer before I leave ...
Read More 2 comments | Posted by Lisa | Links to this post